When Tatum Neill created Elevate Hair, his goal was simple. He wanted to bring a community of hairdressers together for inspiration, music, performance and education. In the past year, he has achieved that with local Elevate shows across the country.

With the success of these shows, Neill, who is the Creative Director for Paris Parker Salons and Spas and Aveda North America Artistic Director of Social Media, was inspired to take Elevate to the next level. 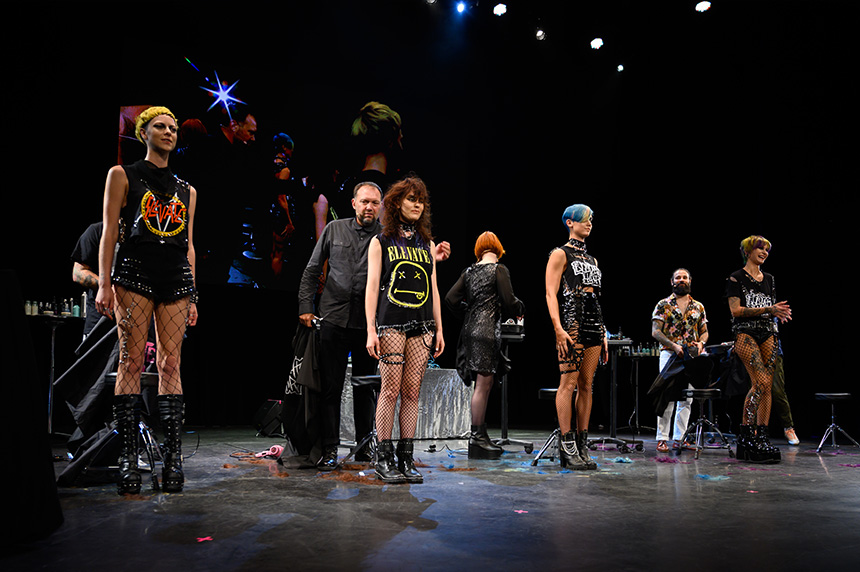 On June 9-10 in New Orleans, the first Elevate Masters launched with a slightly different format, but the same laid-back, hip vibe as Elevate Hair, featuring a wide array of artists, including Peter Gray, Gerard Scarpaci, Lupe Voss and the team from Russian salon, HairF*cker.

Artists began their work on stage with a DJ spinning as the crowd refilled their drinks and networked. When the music stopped, the show shifted into a more traditional format of artists educating as they cut/colored on stage.

“The format worked really well,” Neill says. “That time with the DJ in the beginning allowed the artists to move past any jitters and get into their flow before they started educating,” he adds.

“Masters was more relaxed and more fun than a traditional show,” Bowden says. “But the level of talent had me in awe. The editorial mash-up was super cool. I loved seeing Peter Gray, Gerard Scarpaci and Tristin Morrison up onstage together. The whole show was edgy.”

“The content spoke to younger stylists, but also reinvigorated my seasoned stylist,” he says. “It was also great to see veteran stylists onstage with newcomers. We saw different perspectives and a lot of new, fresh stuff.”

The day after the show, an optional day of workshops was offered, where stylists could dive deeper into the education they saw onstage the previous day.

Both Pryor and Bowden took advantage of this opportunity, choosing classes their teams would most benefit from.

“We took a mash-up class on social media and photography with Tatum and beauty photographer Daryna Barykina,” Pryor says. “And in the morning we took a class with Ricardo Dinis. Seeing everyone onstage the day before got us excited to see them in the more intimate environment of the breakout groups.”

The class on social media was impactful for Pryor’s whole group. “They came back to the salon and immediately started creating content for Instagram based on Tatum’s class,” he says. “They now hashtag differently, give credit properly and felt confident enough to share with the whole team. They’ve been talking to their peers about creating the right composition and lighting, too.”

Bowden says his team, who are already huge fans of Elevate, also went to the Ricardo Dinis class, and three team members attended the HairF*cker workshop as well.

“The HairF*cker team are big noisemakers on social media,” he says. “It was a great opportunity to see them in action.”

Tatum says this is exactly what he envisioned. “Attendees saw the haircuts onstage and got to go to a class the next day to learn how to do it themselves,” he says. “We wanted to be transparent and give away as much as possible.”

The Future Looks Bold and Bright

Both Bowden and Pryor felt the transparency Tatum was striving for was achieved throughout the show, the after-party and Elevate awards, and the bonus day of workshops.

“Sometimes you go to an event and there’s so much going on, that it’s not clear what the direction is,” Pryor says. “But at Masters, I got to see models and artists onstage, and then got a closer look the next day, and the chance to work with the educator on a different level—it all married together.”

Bowden says the natural tie-in to social media felt authentic to the Elevate brand and the future of all hair shows.

“As an audience, we were encouraged to look up hashtags or come up to the stage and take photos to post,” he says. “Tatum’s relationship with many hairdressers is through Instagram, so that was an interactive component of Masters.”

Bowden adds, “The VIP tickets with meet-and-greet backstage access were also unique. There were a lot of big names there, and not all Aveda. I love that fact that we could interact with people from different networks.”

For Neill, Masters was another avenue to develop the stylist community and allow artists to present in a different environment.

“The artists onstage were relaxed and having fun—and the audience felt it,” Tatum says. “When a stylist is nervous onstage, that vibe resonates out through the audience.

“This was a platform for artists to fully create in a genuine, authentic way.”

He adds, “If you look at what does well on social media, it’s the real stuff. People like Elevate because it’s not so far removed from who they are and what they’re doing now—they get inspired and feel they could be a part of it if they work hard.”

Pryor says he thinks events like Elevate Masters are the future.

“Hair shows used to be in conference centers with vendors everywhere—they were always a product pitch,” he says. “This was more of an artistry pitch, and I really appreciated the fact that the light was shining on artists rather than a brand.”

Neill is currently planning the next Elevate Masters event June 7, 2020 with workshops June 8, 2020. For updates, visit elevatehair.com or follow on Instagram @elevatehair.